tl;dr - At the end of the school year 2021/22 we installed an all-sky camera on the roof of our school building. For over three weeks now the gadget has reliably delivered live images of the day and night sky. Our main goal is to catch some impressive meteors and bolides.

A few weeks ago we were finally able to set an end to a year-long struggle and installed our DIY all-sky camera on the roof of our school building. The first steps of this project were already made back in December 2019, but soon after, the Corona virus made its dreadful appearance on the global stage and the pandemic showed to be a hard-to-shake-off millstone around the neck of the endeavor.

Now, however, we are past the first test phase of the cam and everything seems to run smoothly. Let us get you acquainted with what we have.

But what the heck is an all-sky cam? As you probably habe vaguely guessed by now an all-sky cam is a cam pointed at the sky. With its fisheye lens it is designed to produce a circular image of an angle of close to 180 degrees, hence giving you a horizon to horizon spanning view. Every 30 seconds a frame is captured and sent to our website, where it patiently awaits a prying beholder.
A picture is more than 1000 words, so why not just give a quick look: astrocusanus.org
During night time the frames don't enter the digital oblivion after 30 seconds but are stored on a hard disk for further processing. Besides a startrail image and a so called keogram image a timelapse video is generated automatically - and believe me, these are quite impressive.

Obviously we also pursue a scientific goal with our new toy. From time to time an object bigger than the usual grain-sized meteors hits the earth's atmosphere. When such a rock whooshes through thin air, it produces a strikingly bright phenomenon - a so called bolide. For the largest bodies there is even a chance to reach the surface and impact. Such meteorites are hard to find but - and now that's the clue - if its trajectory can be reconstructed from several all-sky images there's at least a chance of success.
This is not as hypothetical as it sounds: Just one night ago, on the 24 June 2022 at 02:10 CEST, a rock in the 120 kg range entered the atmosphere above central Europe, flew over Austria and vanished somewhere in Carinthia. The bolide was caught by several all-sky cam at different locations. That is what we've got:
The bolide is expected somewhere low in the east which is the upper right corner of the image. Behind the clouds - yes, exactly! Got it? No? We neither.
However, cheer up folks! 13.7 billions of years after its creation, the universe is still a very untidy place to float trough. Earth will surely pick up some roaming nugget soon. Our new, never resting eye will be ready for it.
Christof Wiedemair
Acknowledgement to Thomas Jacquin for his excellent all sky software package.
allsky allsky cam amateur astronomy meteor camera 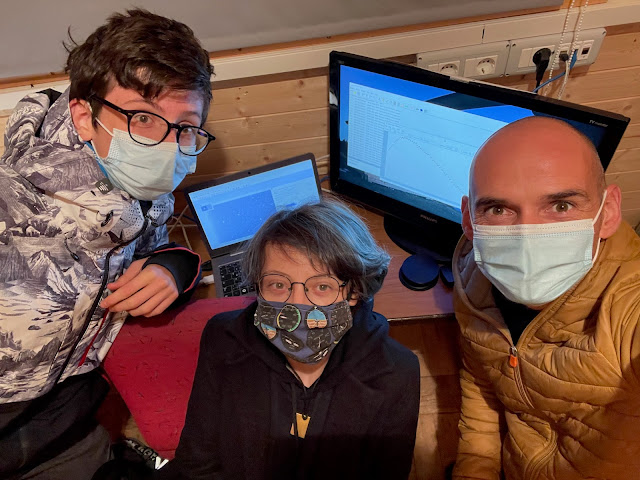 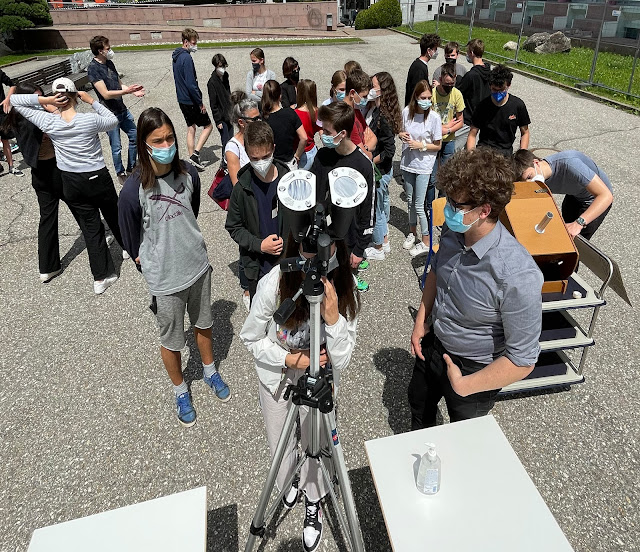 tl;dr - On 10 June 2021 several students of our school were (once more) able to witness a partial solar eclipse. Although the maximum coverage was of only four lousy percent it was a worthy astronomical finale for this school year. Those who missed the celestial spectacle this time will have to wait for more than one and a half years to get the next chance. On 20 March 2015 a partial solar eclipse was visible over Europe and the students astronomy group 'astrocusanus' tried their best to allow as many students as possible to witness the stunning event. Back then it was a great success and moreover a merry and informal gathering of members of our school community of all ages. So we obviously did not hesitate when sun and moon came to terms to deliver a similar show, right at the end of this school year. Now it has to be admitted that the two made a questionable choice in favoring the two handful of observers in Northern Greenland during their 2021 performance. But who are we to
Mehr anzeigen