The small town Ponte di Piave, located in the Po Plain, is home to a very special person; an elderly, very lovable gentleman. You would‘ve never guessed the kind of predator that lies behind that kind face. Paolo Campaner, that's his name, is actually one of the world‘s best and most renowned supernova-hunters; he was able to track down an astonishing number of 12 of these star explosions in the last five years, which is an amazing achievement, especially in such a highly competitive field.


But what is a supernova?

Whenever a huge, massive star has reached the end of its lifespan, it doesn’t simply disappear: It dies in a huge explosion; you could say it dies with passion. One of these explosions can release such tremendous amounts of energy that the supernova shines brighter than all of the other stars located in that same galaxy. A supernova can be seen from millions of light years away. Supernova explosions are quite rare, the average time between two supernovas in the milky way is 50 years. The next one is long overdue, so get ready for an amazing explosion!

Paolo uses his 16-inch newtonian on a daily basis. He has a roll-off roof observatory in his garden and takes a systematic set of pictures of many different galaxies every night. After the data acquisition he sights the frames thoroughly and looks for bright, tiny dots, which normally shouldn't be there. Even though this method has a very low success rate of around 0.07% (1 in 1400), he stays patient.

But why am I telling you this?

It’s the 7th of April 2018, a mild Saturday is nearing its end. What could we do? Exactly, supernova-hunting! Vera, Maximilian, Dominik and I are determined to find one and go to our astronomical observatory. The waning moon shouldn’t be an issue until 3 am, the skies are clear, visibility great. Even the Sahara dust, which was announced on the local weather report doesn't do much besides slightly painting the evening sky with a red glow, so that, too, shouldn’t interfere with our picture-perfect conditions.

It's not as if we had any reasons to have high hopes. It was our first try at hunting supernovas and we didn't presume to immediately follow in Paolo's footsteps. Not only were we lacking experience in the field, our telescope was also significantly smaller and we are sadly often cursed with severe air turbulence.

But after all, the sky was dark and we weren’t concerned about light pollution at all; favorable conditions which Paolo unfortunately never gets to experience in the Po Plain. Our expectations were met, the sky darkness dropped to record values, which we had measured only a few times before. As far as “dark-sky”-conditions were concerned, we couldn't complain here in the 'holy land' of South Tyrol.

The plan was that Dominik would seek out our hunting ground with Stellarium, a free astronomy software that visualizes the sky. We wanted to find galaxies in which a supernova could possibly be seen. That wasn’t a very hard task though, because our view was orthogonal to the milky way, that means, thanks to the spring skies, we were looking straight into the depths of intergalactic space. Thousands of galaxies were waiting for their grand nightly show in the constellations Leo, Virgo, Coma Berenices and Canis Venaticorum.

Vera was assigned the task of remotely controlling the telescope, while Maximilian was in charge of the camera. Both of them were also designated with the important task of comparing our pictures to those from astronomical catalogues such as Sloan Digital Sky Survey (SDSS) and Digitized Sky Survey (DSS). If our pictures revealed some bright dots where there weren't supposed to be any, then we may have found a supernova. We were just waiting for it to happen.

After having overcome a few initial difficulties, we began our journey through the night sky. One galaxy picture after the next trundled into our hard drive and after each download from the camera we eagerly stared at the screen to see which lovely countenance might be hidden behind these meaningless catalogue numbers Dominik had been dictating to us. All of us were left amazed by the diversity of morphology and the majestic looks of these distant islands in space and the observant eyes of Vera and Maximilian were carefully looking for the deeply yearned bright spots that might be out of place.

At an advanced hour, around 00:15 CET, the room was suddenly filled with vibrant energy! Our tired eyes had made out a spot between the so-called Whale Galaxy and its cosmic companion NGC4627…

But stop! Whoever wishes to read the whole thriller — with every single one of its exciting details — should check out the current issue (April 2019) of the German journal “Sterne und Weltraum”, available in our school's library. In the six pages long article, starting on page 70, I describe, how:

(Spoiler alert: The butler didn’t do it…)

Without exaggeration, the events of that night were probably the most thrilling and gripping in the history of our astronomy group - a successful premiere, featuring an unexpected special guest, which will be remembered by all involved astronomers for a long time to come.

Actually, the galactic pole with all its galaxies would be temptingly high in the sky again now in spring... Let’s quickly check the weather forecast! 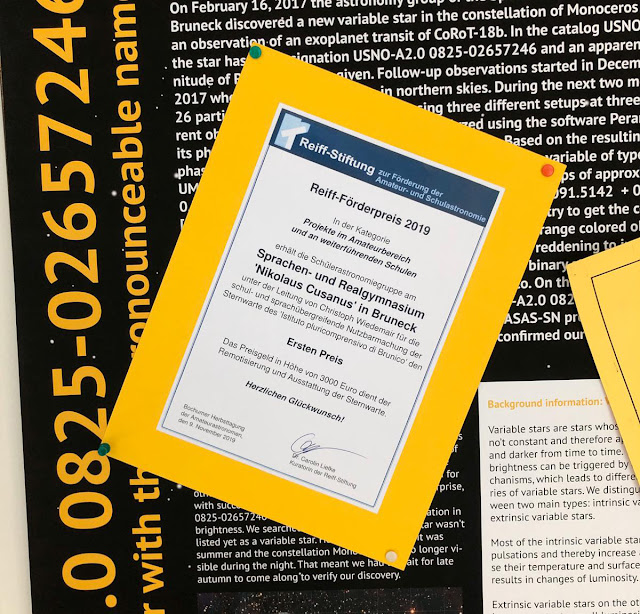 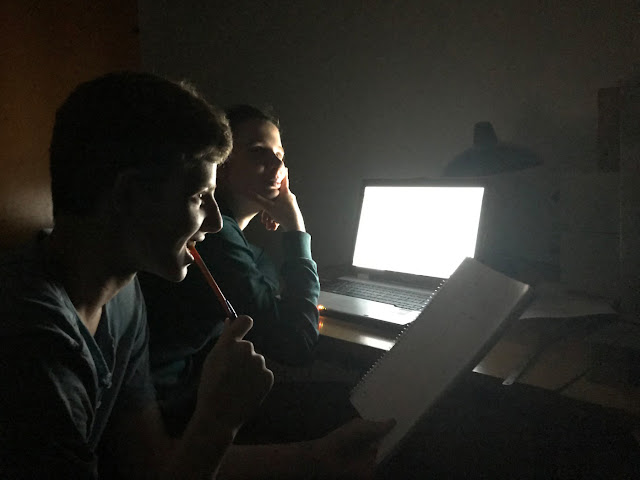